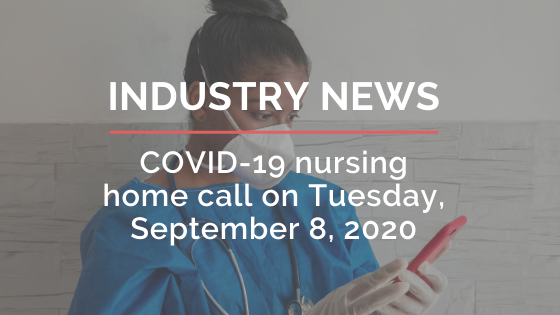 CMS and CDC held a Nursing Home Call late in the day on Tuesday, September 8, 2020.  I recorded the call as the speakers were CMS Administrator Seema Verma, Admiral Brent Giroir and Dr. Robert Redfield (CDC) – all members of the White House COVID-19 Task Force.  The 62 minute, 42 second recording can be accessed here.

Administrator Verma noted that the positivity rate is down slightly and that there is still spread in nursing homes.  She and the other members of the Task Force spoke to testing and the CMS+CDC training program during this call.

To date, 13,477 testing machines have been delivered to 13, 343 nursing homes in addition to 7.4 million tests.  More machines and tests will be sent out this week as well.  Those facilities without a CLIA waiver will receive 1 machine and tests. The CMS’ Interim Final Rule with Comment requires routine testing based on positivity in each nursing home’s county.  Reports of testing go to CDC via NHSN and FEMA looks at the data to allocate supplies.

Admiral Giroir reported that a second level of tests will be starting next week – Binex by Abbott.  HHS will be distributing more than 750,00 of these tests (these are cards and don’t need a reader; cost = $5/test and the tests are very sensitive for folks in the first 7 days of illness) for facilities that are in the red and yellow zones.  There is an advantage to rotate the 2 antigen tests and these tests will be used to supplement current testing supplies.  Governors of all states are aware of this upcoming distribution.  Again, these tests will be sent to nursing homes with a CLIA waiver.

Dr. Redfield noted that the CDC definition of an outbreak is any new case in staff or resident in a nursing home.  POC tests are 15 minutes long but testing can be daisy-chained to do 10/hour.  He noted that the BD machine is “only a few hundred dollars…nursing homes can buy more if desired.” COVID-19 testing is covered by Medicare, Medicaid and private insurers in nursing homes.  Testing and training work towards the goal of “turning most of counties to green zones.”

It was noted that the biggest threat is healthcare workers introducing the virus into the nursing home.

When you listen to the call, you’ll hear Mark Parkinson of AHCA/NCAL make some comments about resources.  You’ll also hear that Admiral Giroir has a meeting this week with BD as it has come to his attention that some BD suppliers of testing materials have significantly marked up these supplies.

It was stated that the national training for nursing homes that was announced about 1.5 week ago has 10 modules and that more than 10,000 individuals have already completed the training, representing more than 2,500 nursing homes.

During the latter portion of this call, a slide deck is mentioned, in regards to testing.  New COVID 19 Testing and Reporting Requirements is that slide deck.