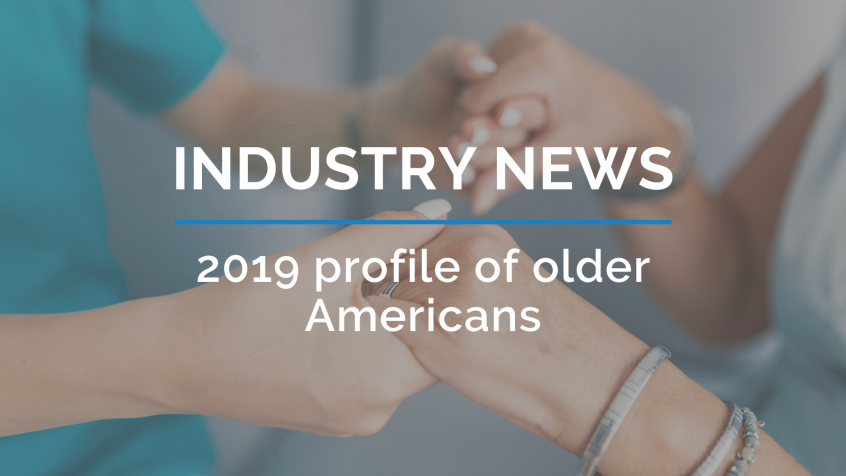 The 2019 Profile of Older Americans is a very interesting read.   The report is 26 pages in length.  The Profile of Older Americans is an annual summary of critical statistics related to the older population in the United States. Relying primarily on data offered by the U.S. Census Bureau, the Profile illustrates the shifting demographics of Americans age 65 and older. It includes key topic areas such as income, living arrangements, education, health, and caregiving. The 2019 Profile includes special sections on obesity as well as aerobic activity and muscle-strengthening activities.

“This report is prepared by the Administration on Aging (AoA), part of the Administration for Community Living, an operating division of the U.S. Department of Health and Human Services. AoA serves as an advocate for older adults within the federal government and is working to encourage and coordinate a responsive system of family- and community-based services throughout the nation. AoA helps states develop comprehensive service systems which are administered by a national network of 56 state agencies on aging, 629 area agencies on aging, nearly 20,000 service providers, and 282 Title VI grantees representing over 400 Federally recognized tribes, made up of 281 Tribal organizations and 1 Native Hawaiian organization.

Principal sources of data are the U.S. Census Bureau, the National Center for Health Statistics, and the Bureau of Labor Statistics. A complete list of sources appears at the end of this report.

This report includes data on the American population age 65 and older unless otherwise noted. The phrases “older adults” and “older persons” refer to that population. Age-adjusted estimates are used when available. The data presented refer to the noninstitutionalized population except where noted. Some numbers in this report may not add up due to rounding.”

There’s a lot of graphs/graphics that illustrate the data quite well, such as:

Above are just a few highlights.  You’ll want to read and share the entire report.  There’s a wealth of information! Additional information can be found on the ACL website, including previous annual profiles.