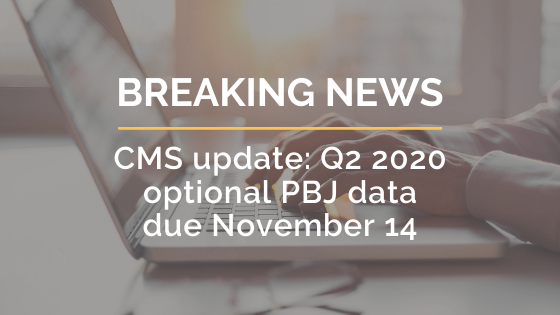 CMS issued a PBJ reporting waiver in March that stated nursing facilities do not have to submit their Q2 (January 1 - March 31) PBJ data by May 15 due to the COVID-19 Public Health Emergency.

CMS released a subsequent letter in June announcing the end of the PBJ reporting waiver.  The letter stated that facilities were once again required to submit their Q3 (April 1 - June 30) PBJ data by the normal August 14 deadline, but that submission of Q2 (January 1 - March 31) PBJ data was optional (though encouraged).

What does this mean for me?

Do I have to submit PBJ data for January 1 - March 31? No, January-March data submission is still optional. If you choose to submit the data, it is due no later than November 14.

What if I already submitted PBJ data for January 1 - March 31? That’s fine, but any changes you might need to make to the data must be submitted by November 14.

How is CMS going to use the January 1 - March 31 PBJ data The data will be published in a Public Use File and available for download at https://data.medicare.gov/data/nursing-home-compare.

When is my July 1 - September 30 PBJ data due? Your July-September data is due by November 14.

We will provide you with additional information as it becomes available.