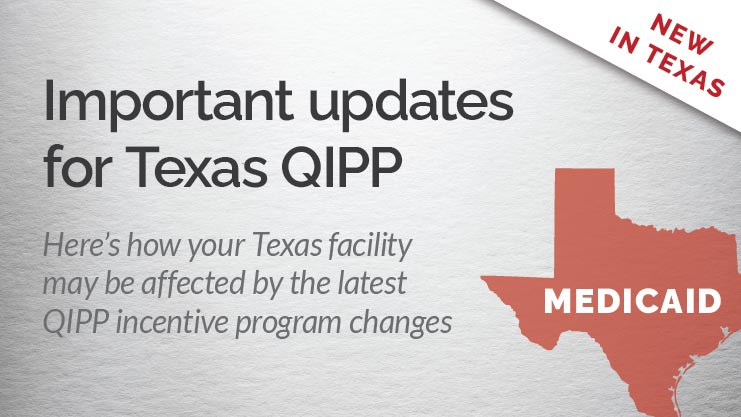 Recently, the State of Texas made important updates to the Quality Incentive Payment Program (QIPP). If your Texas facility actively participates in QIPP, be sure to read the important details below…

What are the QIPP changes?

Recently published updates to the QIPP logic have introduced the concept of “allowed margins of decline” for each metric in QIPP component three of QIPP Year 5. The Texas Health and Human Services QIPP training materials describe these changes as follows:

The allowed margins of decline for each metric are:

How does this impact Texas facilities?

The facilities most impacted will be those performing better than the national average. Consider a facility with a 10.00% performance rate for the Antipsychotic Medications measure. Under the previous methodology, this facility would meet the High Performance criteria because their performance is better than the 14.32% National Average.

How is SimpleLTC accommodating these QIPP changes?

We're now further improving the QIPP dashboard to show actual new QIPP targets, so you'll be able to clearly understand the variance and what changes are needed to meet your targets. We'll roll out those changes as soon as possible.

We understand the difficult timing of these changes given how close we are to the end of the year. We're working hard at SimpleLTC to make our QIPP dashboard even more helpful in understanding your current QIPP status.

If you have questions about the latest QIPP changes or how your Texas QIPP data appears in Simple analyzer™, please reach out to our Support Team for help.